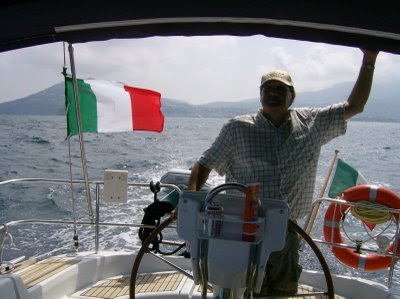 Fearing For My Life In Procida

Bear with me while I tell you a little story here.

It's no secret the Italians are an emotional bunch. If you don't know what I'm talking about, just watch them engage in conversation. The language is full of passion and when you add-in the hand-gesturing, it's a full-blown show that's always fun to watch.

Procida is where we encountered full-bloodied Italian emotion.

After we returned our boat to SailItalia, we headed over to the docks to wait for our ferry to take us to Naples. There was a long line of cars trying to board one of the special ferrys that could 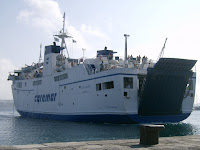 transport cars. One Italian literally swerved in front of another to board the ferry and thus conflict was born. The "cutter" became the last car fitting on the ferry and the "victim" was outraged along with his wife who also started in on a shouting match. Second to Vesuvius, was this man's blown stack.

"Revenge is mine," I thought! This victim was taking back what was rightfully his - a spot on that ferry. He was not only fighting for his rights, but in the process standing up for those of us who have been wrongfully screwed while waiting in long lines... only for some jack@ss to help themselves to a nice helping of CUT, as if our time isn't as important as theirs. [ off soap box ]

The angered victim was promptly told to get off the ferry and wait for the next one, but he would have nothing of it. He began yelling at not only the cutter, but the ferry's Captain who was placing majestic orders through a loudspeaker safe atop the ferry. At one point, the ferry tried to leave and the victim quickly drove his car onto the ramp as the boat was trying to leave! More yelling and fists!

The whole ordeal lasted about 10 minutes when just as suddenly as it started... it stopped. Reinforcements in the form of what looked like the Coast Guard showed up and the vicim retreated to his car, backing off of the ferry.

I caught some of the ordeal, which is in this YouTube video below. I would have take more footage, but I literally feared if spotted, he would throw me and my camera into the Med.


For Food: We walked into the village and worked our way to the top of the hill, venturing for 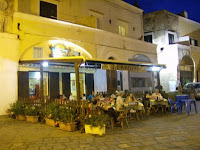 food. We exited an alleyway into Piazza dei Martiri and ate at a tasty pizzeria La Piazzetta along with the locals. After dinner, we strolled downhill and stumbled upon one of the most bizarre things I have ever seen...

TrashFest 2008: There was a large crowd of people gathered near the water's edge. Here there was gypsy-like dancing, chanting, tamborines, a large video screen, a pot-luck dinner and lots of onlookers! We jetted over to see what all the hoopla was about. We watched the video and was overcome with one of those weird life-moments when I heared Joe proclaim "Look - they're worshipping trash!" I almost lost my pizza!

It was true! We watched videos of piles of trash in various forms tell the story of "man bad. trash worse!" and tried to piece together if we were halucinating from bad garlic or not. We later verified everything from an English-speaking Italian we dubbed "Damiano Piccolo," who was also admiring the scene from the fringe. See for yourself (below)!


Damiano Piccolo told us this was a push by the locals for Italy to adopt more progressing recycling measures found in some US cities. We were invited to join-in with the singing. Even though it would be highly likely that I'd never see any of these people again, I found it unconscionable thinking of my whiteboy syndrome dance moves being plastered on the 10 o'clock news, so I opted to pass on the friendly invite.

Our experience in Procida was short-lived as we only docked overnight to return the boat, so we 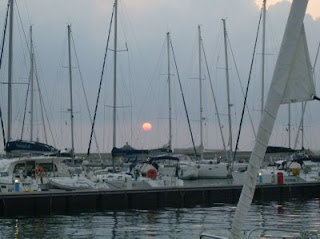 didn't experience much else here. I'm not sure we could have taken more in!

As the sun set upon another amazing day in Italy, we knew well its rise would return in the morning... shedding its rays onward to the next leg of our adventure: Sorrento and the Amalfi Coast.