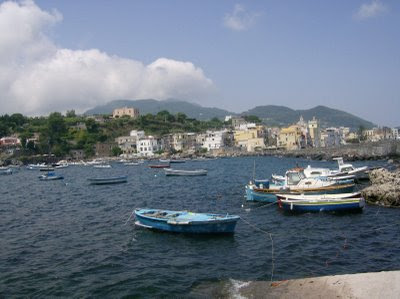 It was dark night when we arrived in Ischia.

Picture the above photo, but with the lights out!

How We Got There: We arrived via boat from Capri. The trip took almost an hour and a 1/2.

What We Did: After anchoring, we loaded into the dingy and headed toward light into port to find a place for dinner.

We walked around a small seafront marina and 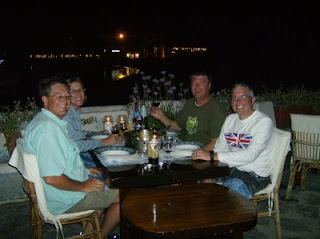 settled on a charming waterside restaurant named "Il Pirata" (literally, "The Pirate"). I later learned that night that Il Pirata was appropriately named; our dinner for four, while impressive, was almost 300 Euro! (about $413 USD).

Turns out our waitress had her MBA in pirating money from tourists!

Here's how she did it:

1) She lied. When dining in Italy, some restaurants include a service fee in the bill. It's basically like including part of the tip automatically on the bill (it's the fee for receiving service). Always check your itemized receipt to see if you're being charged for service so you don't double-up on the tip, like I did. When I questioned our server (let's call her Ladra... feminine for "thief") she said no, but after we left the table, I realized Ladra was wrong. 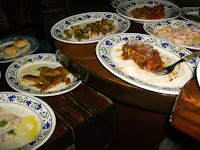 2) She was smooth. "Freestyling" off the menu can be a dangerous thing - especially when you're in the care of pirates! Ladra talked us up, asking if we'd like to eat family style. "Sure," we said. 15 plates of assorted foods later including eel, calamari, pepperoni (grilled peppers), pizza, lasagna, pasta, sordfish, sardines and more - plus a bumper table to hold it all, we realized they were going to keep bringing food until we exploded. At one point, I looked down into a pot of pasta and realized we were 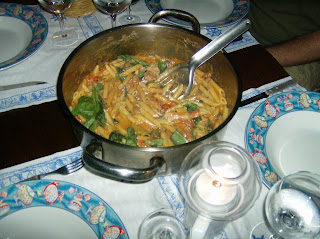 Click the picture at right, if you think I'm joshing!

3) She was Italian. Ahhh... the soft, seducting way of the Italians! Just hearing them speak makes me want to surrender my wallet and beg to be a full-time olive farmer! Ladra went on and on about how good the food would be. "Beddy Güüd," to be precise. She wove a tangled web and we we plunged right in!

Despite the hefty bill, the food was good and I'd suggest this place as long as you keep your hands on your wallet and carefully navigate the choppy pirate waters of "Il Pirata!"

After a gelto from a nextdoor gelataria, we waddled back to the dingy *which clearly sat a few feet lower in the water post dinner* and headed back to the yacht to be rocked to sleep by the sea. 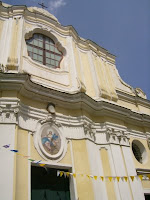 The next morning we boated (or was it bloated) over to Ischia's main harbor. There was plenty of things to see and do on this side of the island and we enjoyed random walks about and darting in and out of shops that looked interesting.

Ischia (or "Iska," as Ladra called it) boasts some wonderful views and is a relaxed, less touristy place to glean unique glimpses of the glory that is Italy. 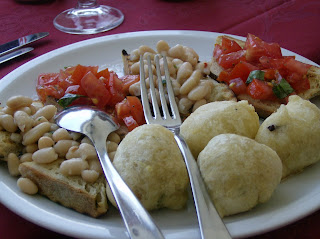 Before we left, we enjoyed a sensible lunch at Pirozzi. We had an appetizer plate (at left) that was tasty then we dived into the Italian staple equivalent to Tex-Mex chips and hot sauce "ensalata caprese." And for the main course? Tagliatelli with funghi (mushrooms) and Mozarella gnocci. Sensible, right?

From Ischia we sailed 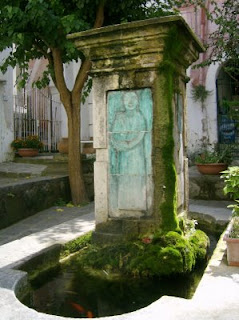 over to Procida, where we sadly had to return the yacht rental to Sail Italia. But don't think the island hopping adventure is over just yet!

Come join us for a peak of Procida!