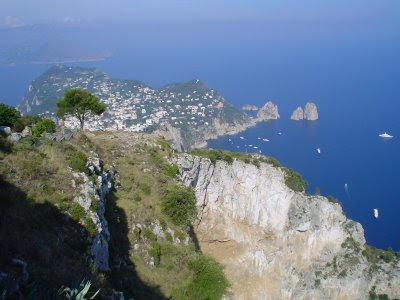 ...we finally met up with our pals Jeanie and David to board their yacht rental for two days of fun in the sun. Starting with...

Ironically, just after returning from Italy in '06, I purchased a Rick Steves' DVD featuring all great things Italy and learned there was a chair lift on Anacapri, Capri's conjoined island twin.

How could I have felt I adequately researched the key things to do in Capri and missed a chair lift? And what the heck was Anacapri? Well, it was true, per the DVD footage. So when I had the 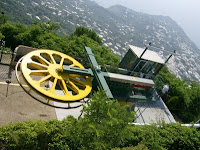 chance to revisit Capri, I literally lunged at the chance because I was going on that chair lift one way or another.

The lift was awesome. I was familiar with snow ski lifts from my travels to Colorado so it didn't intimidate. The lift was actually made in Switzerland and while these weren't the Alps, the 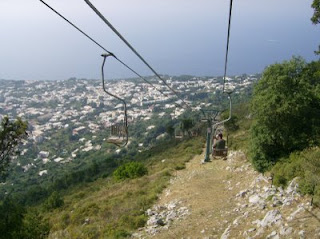 2,000 feet atop Anacapri and looking back toward Il Faraglioni (see pic at post's top), I felt like I was on top of the world (or at least inside a snow globe looking at an iconic view).

And it's true, Rick, looking 100s of feet down toward the soaring seagulls is incredible. And something I'll never forget. 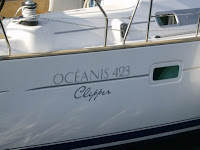 While all aboard the Océanis 423 Clipper a.k.a. the "Gaia," I realized that life surely can't get much better than this. Joe and I both jumped into the pretty blue water and while I shouldn't have been surprised, I was. It was salt water! Turns out I equate pretty water with salt-free bottled water, which isn't necessarily the same!

It was then I wished I had a $1.99 (~2.85 Euro) float to lay on. But alas, no tchotcke stores in site. So, because of my freaky fear of sharks (compliments of the 1976 move JAWS), I was ready to get out after a few moments of wondering if I'd escape with (con) or without (sensa) feet.

Yeah. Gotta watch out for those Italian shark attacks. :)= 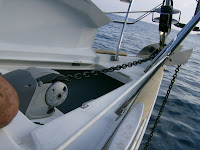 ...And I boarded a yacht
chasing the setting sun!

After a snack, it was time to lift anchor and head toward Ischia before dark. It was then our eyes set on Il Faraglioni and we knew just what we had to do.

We unexpectedly found outselves boating right thru Il Faraglioni. It was the 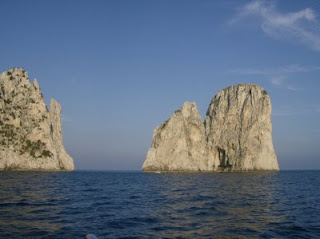 equivalent of winning the Texas Lotto! For us, just viewing the huge water rocks from afar was amazing, but boating between them?

We bid a [hopefully temporary] goodbye to Capri and after rounding the back side of the island, pointed the yacht's nose straight for the setting sun. 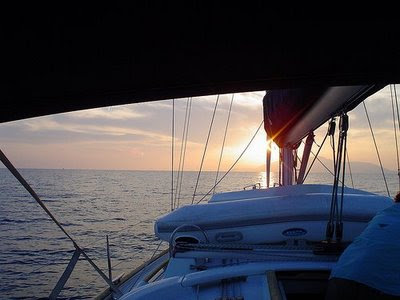 for the love of : italy!


How We Arrived To Capri: Aboard a hydrofoil from Naples.

Suggested Stay: The longer, the better.

Lodging: We never slept on the island but there are some high-end hotels here. On Anacapri, just underneath the chair lift, is a cool place with apartments for rent called 2 Pines Residence. Helpful Link 1! and Helpful Link 2!

Capri Tips: Make sure and visit my '06 post for more info. about Capri!