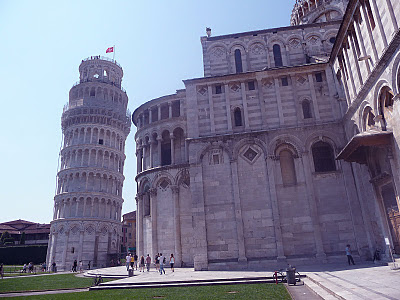 Someone said there's a leaning tower here. Oddly, we had a hard time finding it.

A half day, unless you want to immerse yourself in the power of Pisa.

Leaving our home base stay in Monterosso, we arrived to Pisa via car from the A12 Autostrada Azzurra which snakes it's way alongside the Mediterranean (specifically the Ligurian Sea). 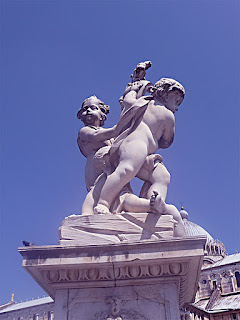 tower power is the best known part of Pisa, I found the entire grounds of The Cathedral Square inspiring... probably because I later discovered that I was standing in the Piazza dei Miracoil (the "Square of Miracles"). Of course I had to pretend there weren't swarms of tourists engaged in a flurry of "forced perspective" photo taking.

Regardless, visiting the complex will not disappoint. In fact in 1987 the entire square made its way onto the UNESCO World Heritage list. From oldest to newest, it's comprised of:
Why not strap yourself in your chair and go on this amazing 360° panoramic tour of the Square of Miracles!

Fancy Gothic? You'll want to check out this inspiring church dating back to 1230. If you've enjoyed some vino and squint, this quaint church may look like a miniature kissing-cousin of Milan's Duomo di Milano.

This was the airport I learned perhaps the most costly lesson when touring internationally : travel light.

Although I was leaving 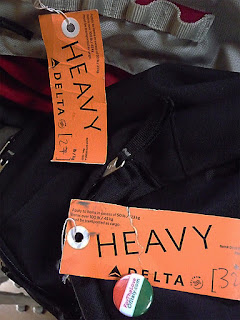 with the same bag I brought to Italy, it appears my Texas-sized eyes for souvenirs meant my efficiently-packed bag (as did my travel partner's) exceeded Delta's weight expectation.

$400 in heavy bag fees later, our lighter wallets and bruised egos were headed back to the US via JFK Airport. We were traveling on the Fourth of July... and I remember that we were able to watch fireworks displays from the outskirts of Planet Earth all the way from NYC traveling west to Dallas. A Fourth I'll never forget.

So while I've since made stateside peace with the over-inflated bag fee, there are a couple of tips to note: 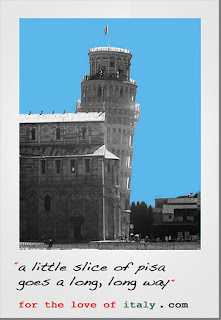 I knew better than to try and find the tower *on the way to the airport* the day of our departure from PSA; I assumed that the tower would be easy as pie to find. But at just 8 stories, the leaning wonder didn't project from the Pisa skyline as I had envisioned. After 30 frantic minutes of driving the streets of Pisa later, we finally found it, but our untimely arrival meant "pinched time" spent at The Cathedral Square.

Regardless, "A little slice of Pisa goes a long, long way!"

Our Next Adventure:
The calendar page turned to 2011 and our Texas toes landed us in Northern Italy.