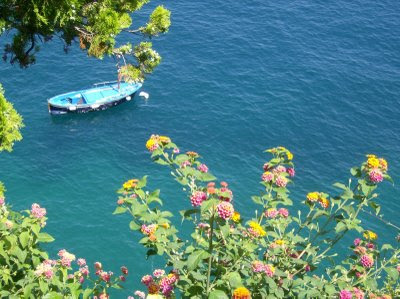 For me, "Conca dei Marini" means "What a wonderful place!"

I wouldn't describe "Conca" as a resort town or even a touristy town. It was better than both! Conca dei Marini is an incredible place to have spent a wonderful week of my life.

How I wish I could live there for a lifetime! 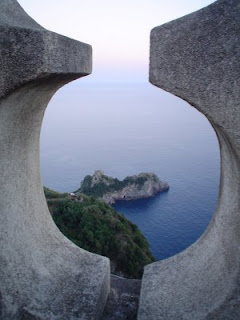 . We quickly found two properties that peaked our interest; one with a great terrace, but it looked a little Apartament-y; and the other property - a watch tower, which was not your typical place, but it had historical significance.

After a short deliberation, the choice was clear. The unique, historical option won out and we were headed to Conca dei Marini!

How To Get To Conca: We arrived to the Amalfi area after a brief boat ride from Naples to Sorrento. Once in Sorrento, we caught a bus ride (via SITA) en route to Positano/Amalfi. If you've never been or heard about the ride along the coast, it's one of the prettiest on the planet.

Just as amazing, the bus drivers whip their over-sized buses around narrow, hair-pin turns while jetting around cars and scooters with the greatest of ease.

We had explicit instructions from the folks at Summer In Italy to ask the bus driver to be let off at Conca's Hotel Belvedere (below). We asked our bus driver to do so, which he promptly forgot. Luckily, my traveling eagle eyes saw the Hotel Belvedere sign breeze and we pummeled our way to the front of the bus for a forced stop. 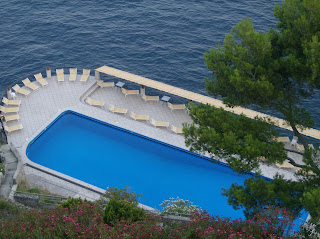 After a phone call via cell phone (see iFAQs for how best to use your PDA), a local named Giuseppe was there in a snap to drive us up the twisty turvy road to our temporary home away from home: Villa Merlata.

Suggested Stay: At least a week. Less, if you have a weak stomach for a great time.


A Must Stay: Villa Merlata. 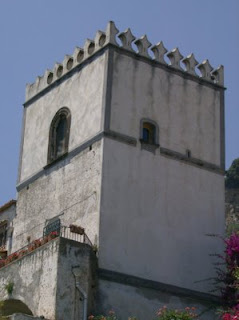 This former watch tower offers unforgettable views on my Top 10 Views of a Lifetime!

When we first read of Merlata, we wondered if a tower was the place for us, or just a bunch of marketing "hoo-haw" that sounded good on paper, but not in real life.

Well, we were pleasantly surprised. After entering this place, we wished we could have it (for free, of course)! 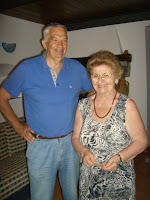 Caretakers Giuseppe and Maria were most hospitable. Like family, but better.

Shortly after arriving, they greeted us and put into our care much appreciated ice trays and freshly-picked lemons from the terraced family garden out front. Some lemons were the size of grapefruits!

I wound-up asking for more lemons and Giuseppe gladly gave the goods.

You see, I had turned our Italian kitchen into an liquor lab, where I was making lemonade infused with vodka which we enjoyed rooftop 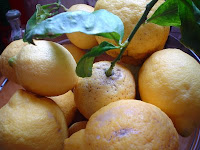 at our daily happy hours.

Recipe for the Perfect : Lemonade

1 part - Vodka (or two parts, if you're adventurous)

Mix all ingredients and serve on the rocks. Pucker up, and enjoy!

And the Recipe for the Perfect : Conca Happy Hour?

1) A pitcher of my homemade lemonade served on the rocks;

2) A bag or two of tasty cheese puffs, shown at left; and

3) Intoxicating views of the coastline, including boats on sun-rippled water. And of course the wonderful sunset rays. Sample shown below. 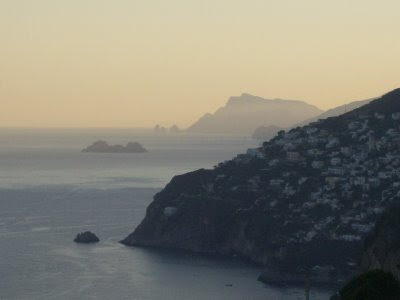 Heard a bit about limoncello?

I have, too. It's an Italian staple.

In fact, despite more than one trip to Italy, I finally tasted it for the first time during my third trip in '08 when we had a sample in Amalfi.

Wanna learn more? Ed, the dad of travel friend Jeanie, sent me his Limoncello recipe, so I've posted it right here on for the love of : italy!, so you can make your own. Extra : Extra : My great friend Teresa sent me this link to a site with loads of information - all things celebrating Limoncello.

Villa Merlata was very comfortable and we found the property description "spot on." While it was built in the 1500s, Merlata had been completely updated, including an air conditioning that worked perfectly.

All within relatively easy walking distance of the Villa are a grocery store called "Coes," a liquor store, Poste Italiano (the post office), a bar and a nick-nack store where the friendly owner was very helpful matching us with things to trick-out our temporary home (candles, hand soap, bus tickets - even highlighters). About 50 feet from the Villa is a Macelleria (butcher). I never went in there, but 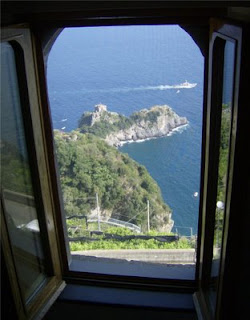 this place was open into the wee hours of the morning preparing (grinding) meats, which I found a little creepy. : )~

While a little tricky to get to, Conca dei Marini turned out to be the perfect pick for our Amalfi Coast stay. Conca sits between Positano and Amalfi and there's plenty to see and do all within reach. Ravello. Sorrento. Salerno. Or just sunning at the beach.

Ready to go? In just a few clicks, you can schedule a rental of Villa Merlata from Lucca and the fine folks at Summer In Italy online right here. 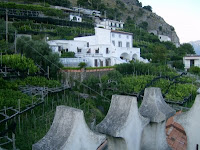 If Merlata isn't available, other area accommodations you might check out include Roseville (at left) which was a B&B located just behind Villa Merlata and it had a pool we envied. Or the supreme serviced Hotel Belvedere which has private balconies (shown below) and close-up views of the sea.

Getting Around: The first two days we tried to be locals, by walking the hills with a smile. But after the sweat rags were full, and the smiles gone, we decided scooters would be an option we would have to try.
True Fact: One day we walked from Villa Merlata down to the beach and later realized that the 1,600+ round-trip steps were too much to revisit. So we caved and rented scooters.

Scooter Rental: What a great idea that was!

I realized later that I lost 8 American pounds (not British pounds, but American FAT pounds) while on vacation. That's a diet I'd like to try again! 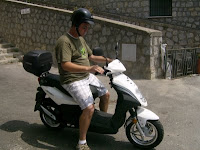 While I gained the poundage back two weeks after our return, I realized the steps of Conca dei Marini would have killed us, had we not opted for another mode of transportation. Lo Scooter, here we come!

Gaitano hooked us up with a scooter rental and the next day Paula and Phillipo, the incredible scooter duo, showed-up. Friendly. Prompt. Totally Italian.

They quickly presented a contract. At first, we thought, it was penned only in Italian... later we learned there were English sub-scripts. 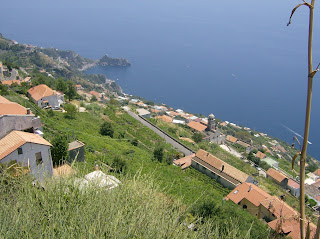 Our first day, we crammed ourselves onto our single 50cc scooter. But with the weight of two American arses, we could barely make it up the hills from Positano back to Conca. A rosary and some white candles we had not. So...

...we contacted Paula for another scooter. After much broken Italian-English, we arranged a pick-up: to take away the wimpy scooter and bring a man-scooter, sized to fit. They didn't have larger scooters so we wound-up renting one for each of us, which solved the trick. 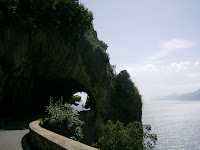 enough to rent a car, it will be hard to find a parking spot along scenic spots. With a scooter you can just pull over and voila - you're able to take-in breathtaking views or an impromptu meal. Our scooter rental was about 100 Euro for a three-day and 100% well worth it!

Rent a scooter while in Conca, for the love of : italy!

Major Props: Hotel Belvedere! We didn't stay at this hotel, but if we go back to Conca, we

sure will! Happenstance set us at the foot of this fine hotel. We stumbled inside for some information and fell into the graces of Gaetano - a local who treated us like royalty, despite the fact we were not hotel guests.

At our request, Gaetano quickly reserved us a scooter rental and later for our departure, our taxi rental - both of which made our stay flawless and unforgettable.

After seeing the out-of-breath expressions atop our out-of-shape bodies, Gaetano offered to drive us back to Villa Merlata as he was getting off work in 30 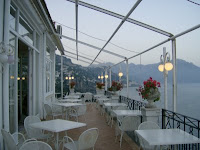 minutes. In the meantime, we enjoyed some bierre and snacks rooftop.

We have Gaetano's email address and have been keeping in touch with this friendly Italian find! 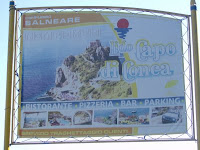 Sitting at the base of rocky slopes, there's a jeep that will drive you down, down, down to the cape. You'll have to rent at least a c

hair (or an umbrella, if you wish). The staff was friendly and there's beer, ice cream and sights to be had here, so you'll want to visit at least one afternoon while you're in Conca. Weekends were really packed, so get there early or you'll risk a full house stock-out.

Watch the video below of some kids having fun at Lido Capo di Conca.


Ravello - This charming village is 100% unforgettable! Visit my Ravello post for more details. Do not miss Ravello when in the area; I'd place it above Positano or Amalfi, if your schedule is tight.

Positano - Sadly, we only ate lunch in Positano, but it's a pretty village right on the sea. See it now!

Avoids: Hotel Il Saraceno. We stumbled upon the beach patrol here, who was a total jerk. In a huff, he caused a scene and threw us off the "private beach" that wasn't marked as private. The rudest person we encountered in 6 trips to Italy!

When It's Time To Leave: We didn't really criticize our return schedule as we figured we could endure pretty much anything. While in Conca, we revisited our itinerary and realized we were leaving on a 7am flight from Naples. From Naples, which was over an hour car's drive away! Mamma Mia!

Gaetano convinced us to hire a taxi to drive us into Naples vs. sleeping overnight in the airport. While pricey, it was pretty much our only option as the bus lines weren't running at 5am in the morning. And the icing? The bus drivers were also on strike while we were there! Great times!
Our taxi cost us 110€ (pre tip) and while expensive, we were driven by a business preofessionally-dressed and easy-on-the-eyes Italian Stallion in a new Mercedes which made it to the airport without a hitch. 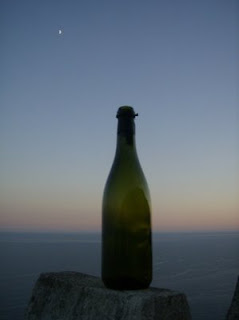 We found it a charmingly relaxed town and we look forward to the day when we might be lucky enough to return.


So sorry about the sub-standard pictures. I later found out my two-year old HP camera was on the outs, and as a result? The blurry pictures for my 2008 adventure! : *(
for the love of : italy