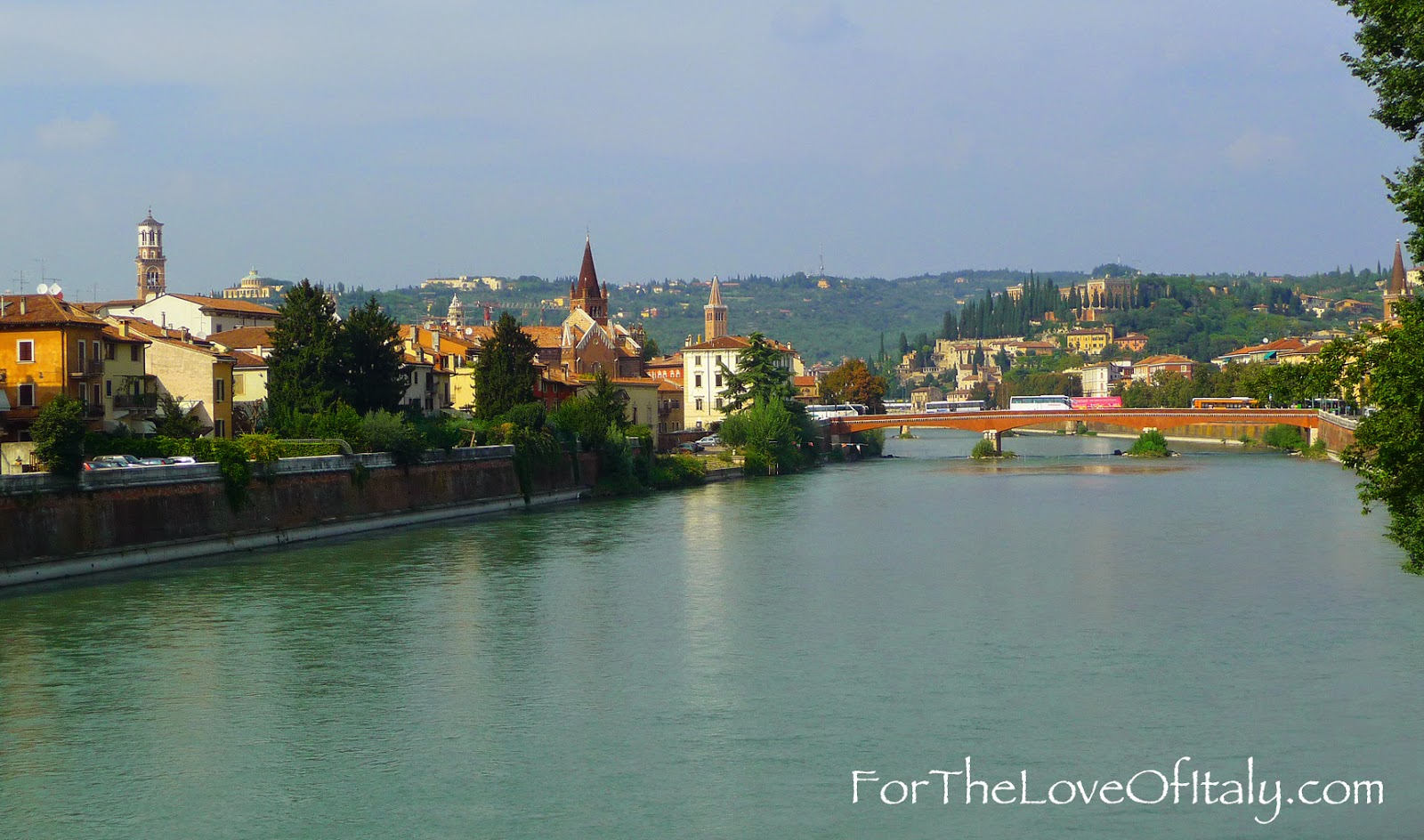 The Walls Of Verona

Enchanted by Verona's lore we actually opted for a day trip in Verona from our stay in Venice. Verona - in Italy's Veneto region - is a northern Italy city tucked alongside the Adige River. The entire city is a UNESCO World Heritage Site with about 700,000 residents. While Verona is one of Italy's Top 10 largest cities (I prefer the smaller towns) we found Verona sprinkled with charm everywhere our eyes rested.

Anything less than a full day in Verona will be like short-changing yourself! Verona is best consumed like a fine Italian wine ... s l o w l y . We left Verona wanting more time there - so if your watch and wallet allow, try for at least 2-3 days to really drink-in the city. Verona is located between Milan and Venice. In about an hour and a half we arrived in Verona via train from Venice's Santa Lucia train station.

Because we accidentally bolted for the first train station bearing Verona's name (Verona Porta Vescovo) we de-trained too early and wound up walking 30 minutes to the city center. If you're eager to enjoy Verona proper make sure and depart at Verona's much larger "city center" station called Porta Nuova.

You can also arrive to Verona via plane or car. 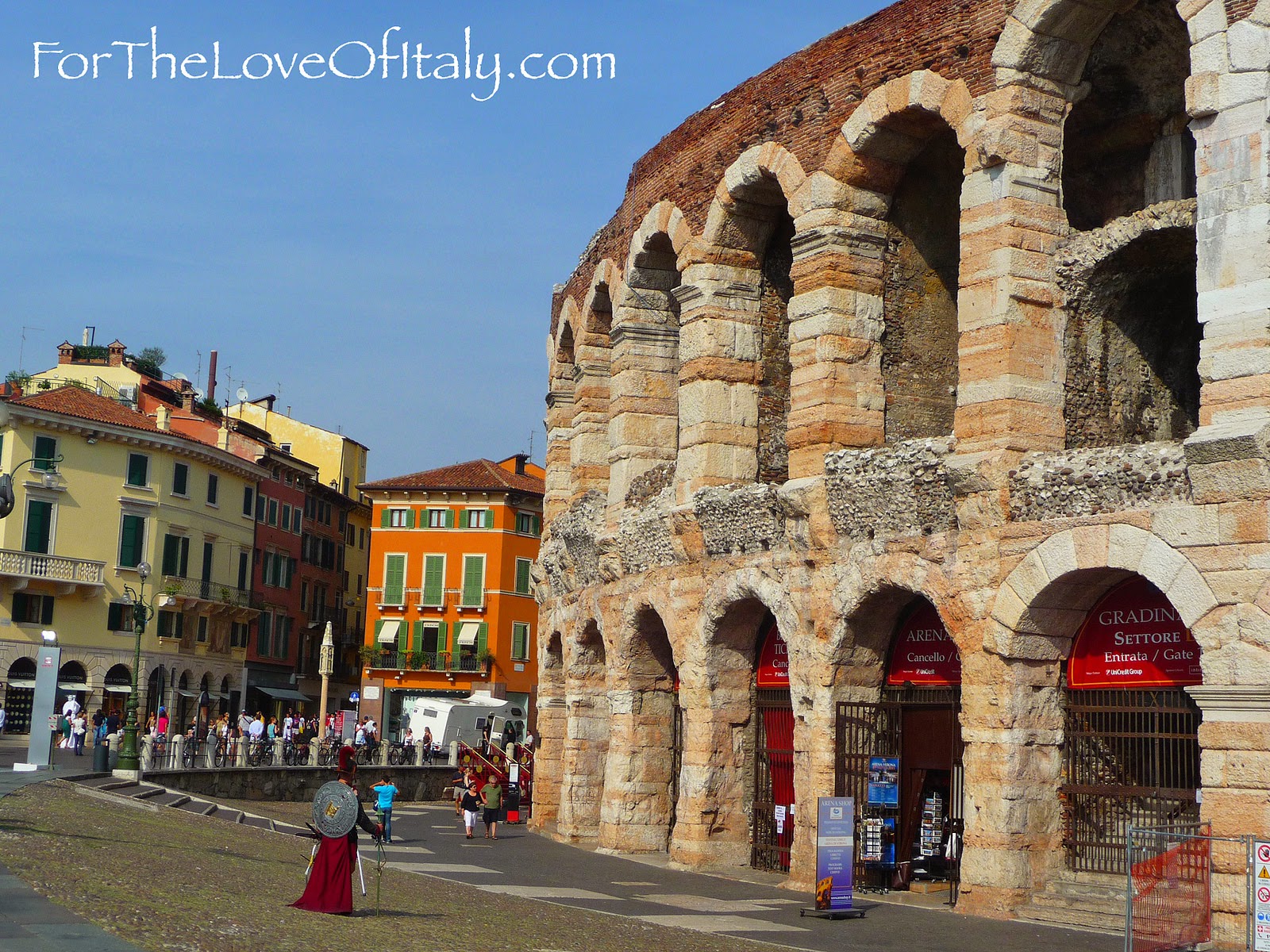 Arena di Verona ~ Verona's impressive arena is located in Piazza Bra and was built in the 1st century. The highly-regarded area is the stage for large-scale opera and musical performances. The arena is large and could hold 30,000 in ancient times, which is really something to sing about. :) You can visit the Verona Arena website for some great information, pictures and details for upcoming performances. 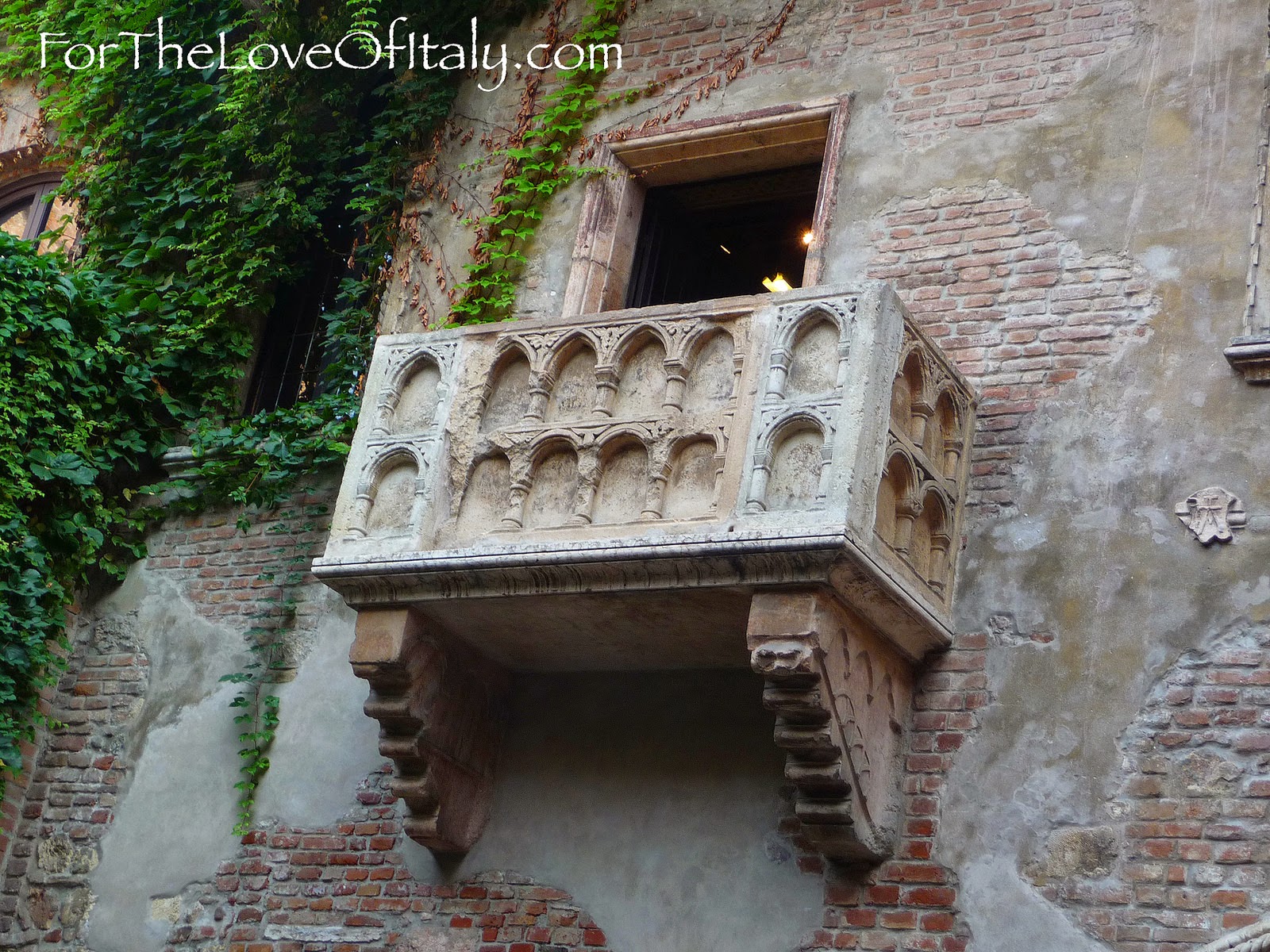 Juliet's House (La Casa di Giulietta) ~ Perhaps one of the most visited alleyways in Italy, this balcony lives in the minds and hearts of people around the world.

Set in Verona and penned in the 1590s William Shakespeare's famous play Romeo and Juliet's memorable balcony love scene is an inspiration for all. Sadly, Juliet's balcony shown above was not built until the 1930s - hundreds of years after the play. Fact or fiction aside, the courtyard underneath the balcony is truly worth seeing for the graffiti works of art and the beautiful statue of Juliet that has been graced of thousands of hands. You'll also find lots of padlocks here bearing the names of love-sworn couples. Nothing quite says "love" like a padlock. :) 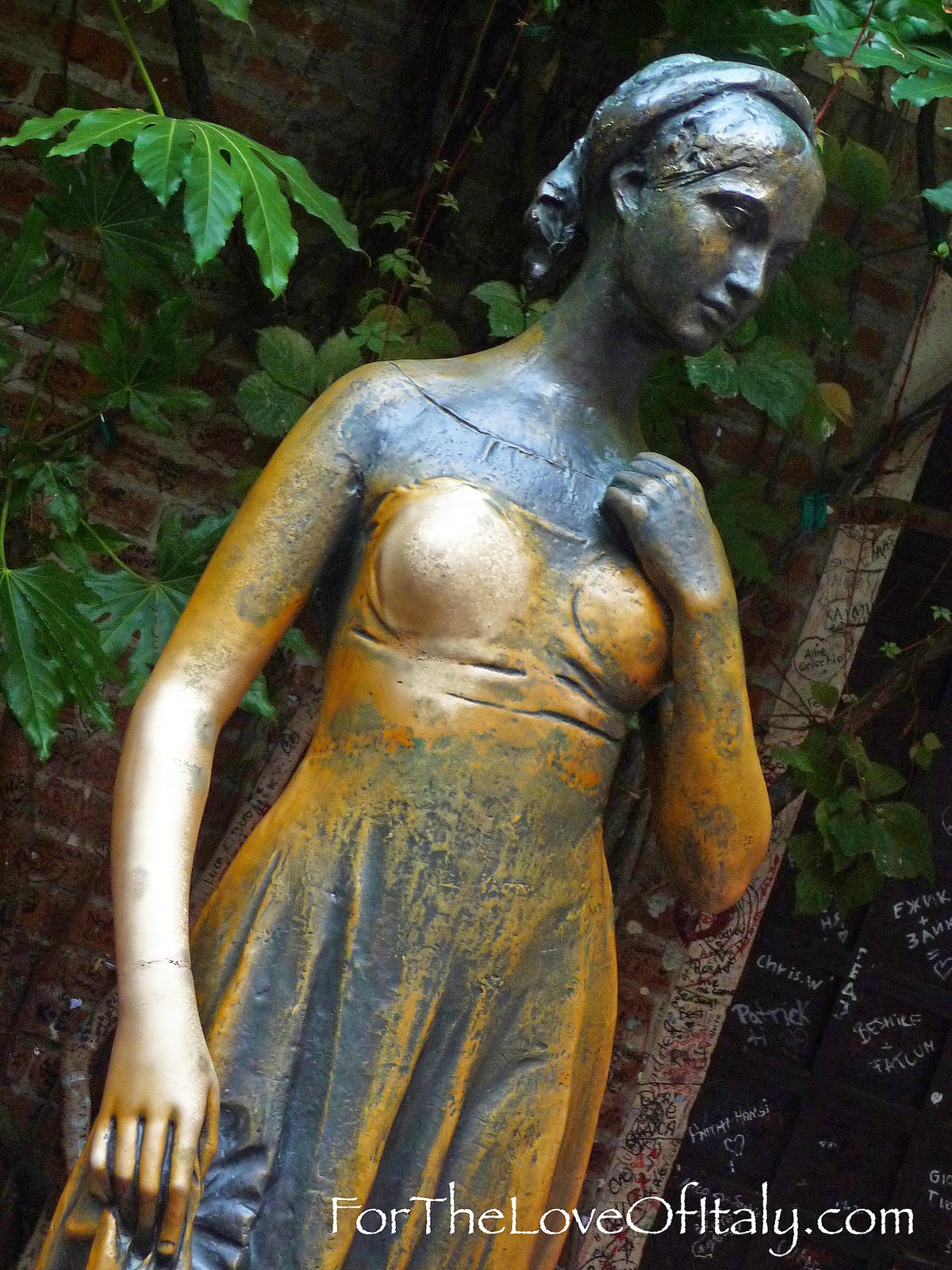 The Juliet statue you see at left is actually the original since 1972 but due to countless thousands of hands rubbing on the bronze beauty (there's no doubt where she was rubbed most often from the picture) she has been retired to a museum and a replica has been commissioned. More about that story here. 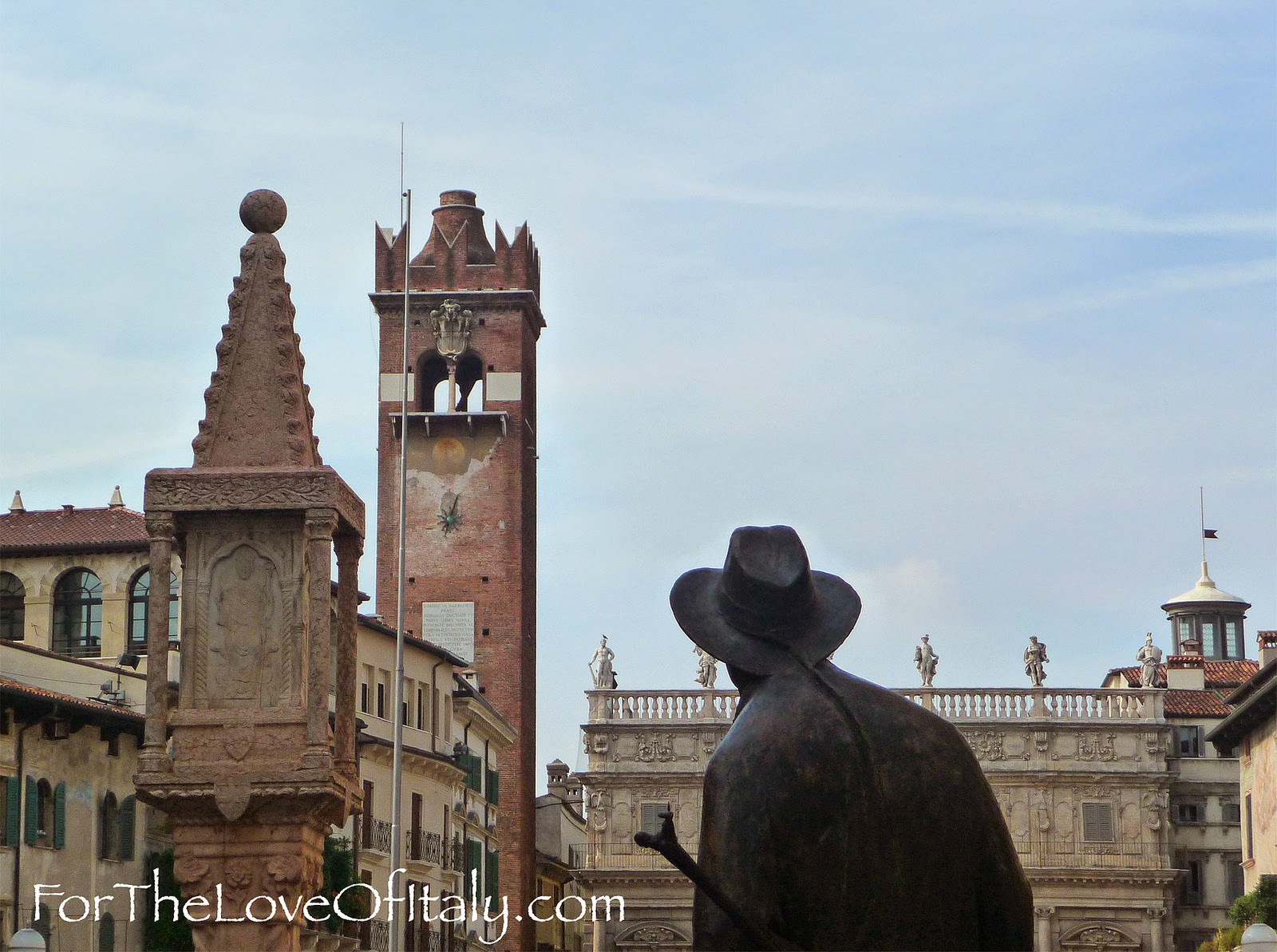 Piazza delle Erbe ~ You could spend a day here just gazing at passersby, architecture and enjoying the sights and sounds of what used to be the city's Market Square. Here we rested at an outside cafe and enjoyed lunch. In Piazza Erbe you'll see a great statue of Italian poet Berto Barbarani that reminded me of the Stevie Ray Vaughan statue back home in Austin, Texas. Also in the Piazza is a magnificent water fountain built in 1368 topped by a statue of the Madonna Verona that you won't want to miss!

Have a look at more pictures here on FTLOI Flickr.

A week in Lake Como. We're still pinching ourselves!