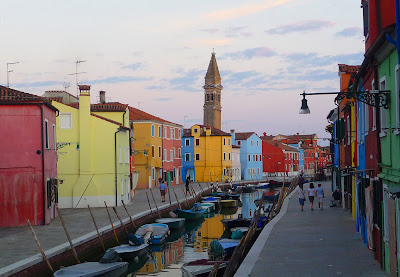 Since 1903, Crayola has been pushing the outer limits of color and imagination. As a kid, I spent many days dreaming, creating and marveling my Crayola crayon works of art. 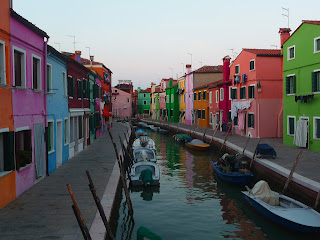 Little did I know that years later I would set foot in a small Italian island town that Binney & Smith Co., the makers of Crayola, surely must have inspired (and vice versa).

Burano's charming community loves color; the folks here need not apologize for their choice of color, only for the lack of boldly living the variety of color itself. 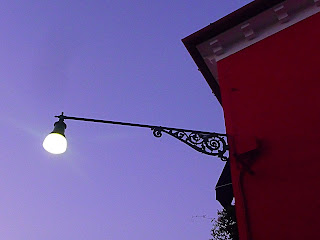 We showed up late in the afternoon and missed the full saturation of Burano's kaleido-scope of color basking in the bright sunlight so make sure you arrive no later than high noon. 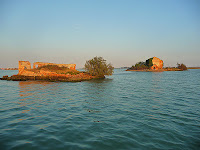 Lagoon hopping means you'll be arriving via water craft. We found two water bus lines from from Venice to Burano. Allow 45 minutes-to-an hour for a one-way trip. We were eager to jump water bus for land and later discovered we arrived at the Island of Mazzorbo. Turns out that was a great thing (read more below). Consult a waterbus map to ensure you arrive where desired!

The Lace Museum is housed on two floors and contains samples of lace from their origins in the 11th century through the 20th century plus videos and other ancient articles. Let's have a look-see:

Visit the official Lace Museum's website where you can learn more about lace making, search an online lace-related database and purchase museum tickets. Get a great view into the art of lace making for just 5,00 Euros per ticket (discounted tickets are available).

The stately San Martino bell tower will guide you to greater Burano from the outer island waters. The tower had an eery tilt to it. I wondered if it would still be standing by the time we reached its shadow.

The origins of San Martino date back to around 1000 and was built in its current form in the 16th century and officially consecrated October 29, 1645. There is a rich history to the things you will find inside. Read more about them here. 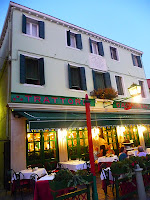 This trattoria has been managed by the Barbaro family since it was found in the early 20th century.

Romano's is well known for their typical lagoon cuisine like risottos and their fresh fish dishes. I was surprised at the long list of famous painters, sculptors, musicians and celebrities who have eaten here including Charlie Chaplin, Ryan O'Neal and Farrah Fawcett.

Mazzorbo and The Venissa Estate ~ 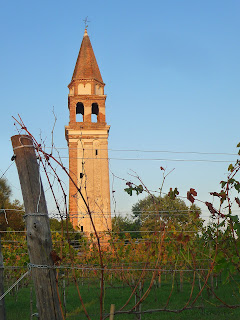 island twin, casually boasts a single walking bridge connecting both islands. On Mazzorbo, make sure and check out the beautiful Venissa Estate formerly known as Scarpa-Volo. The estate includes a charming restaurant run by Paola Budel, an ostello with 6 rooms for rent, a vegetable garden - all situated in a great location to consume local views of the islands. 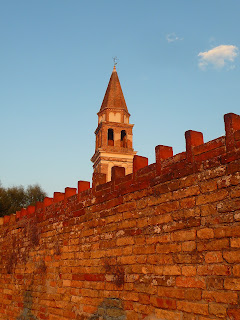 The grounds are incredibly peaceful. You'll easily spot Santa Caterina, an old tower that watches over precious grapes from within a walled vineyard, serving as the oldest bell in the lagoon (circa 1318). The Venissa grapes are unique; the Venetian Dorona or "Golden Grape" has survived formerly presumed extinction thanks to the work of the folks at Scarpa-Volo. It just began to be sold in limited quantities in April 2012.

A stone's throw from Burano and you'll be in Torcello. While the setting sun sadly made us return to our Venice rental, this island was once more powerful than Venice itself. On my list for my return is to walk across the Ponte del Diavolo (the Devil's Bridge) and eating at Ristorante Villa 600, which dates back to 1600. With amazing architecture including the Cathedral of Santa Maria Assunta (639), why not make a stop here while you're in the area?

Have a peek at some more pictures of my stop in Burano here on Flickr. 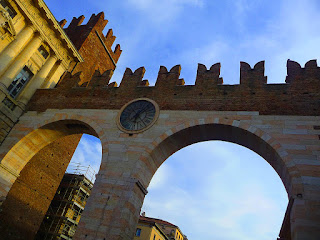 Verona. This place was oozing with so much charm my camera batteries died. My newest post is in the oven... and coming out soon!
Posted by PK at Saturday, October 27, 2012