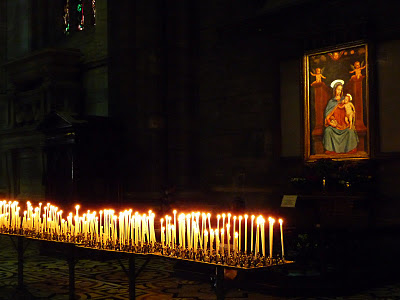 Our calendars turned to 2011 and our lucky Texas toes landed us in Northern Italy to experience our fifth trip back to the magic of Italia. 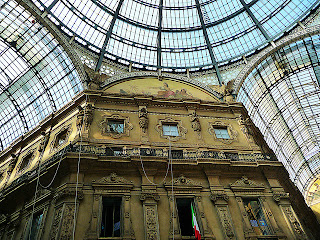 Milan is huge. You can easily fly directly into Milan from cities across the world. 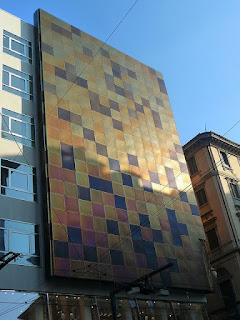 Who hasn't heard of famed Milan?!

With the reputation of being an economic and fashion capital city, I thought Milan may be more of a kissing cousin to Dallas. While my wallet was thin, my eyes for shopping are wide, so I decided to have a Milan look-see-shop for myself!

And the people? Our B&B hostess in Venice said the people of Milan had "gray faces," but I saw no evidence of these folks; our tour guide and hosts couldn't have been more charming... and accommodating.

Mere hours before my Milan departure, I set my hopes on seeing The Last Supper while in Milan. When my friend Amy said I should have purchased the must sought-after tickets weeks in advance, my heart sank. 2-3 hours of internet research later, I found that in order to gain entry to view da Vinci's masterpiece, I would need to buy a pre-set tour package, with one of the stops being my first viewing of the last supper.

Turns out that was a great idea... and worth every Euro.

Booking online with Autostradale was easy to do and helped us squeeze-in timely stops at key Milan landmarks in three mere hours: 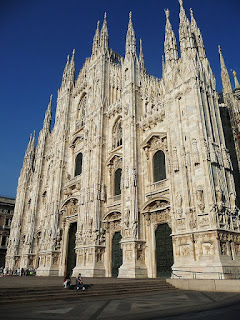 The Duomo di Milano is the fourth-largest cathedral in the world and the largest in Italy.

While it took almost 600 years to complete (that's older than our country, folks), the finished results are amazing. I can best sum up the cathedral in three words ~ Go. See. It.

Here you'll enjoy a beautiful painting of the nursing Mary (pictured at top), the radiantly red candle "Tree of Life," the largest stained glass windows on our planet, 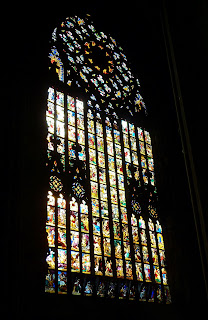 the Holy Nail (believed to be one of the nails with which Christ was crucified) and a stair lift to a rooftop that is a city in and of itself while sporting amazing views of Milan.

Consider this: "There are more statues on this building than any other in the world, 3,159 in total. 2,245 of these are on the exterior together with 96 gargoyles and 135 spires." Mind-blowing, huh? Needless to say, visiting the Cathedral is an absolute must-see-do when in Milan. 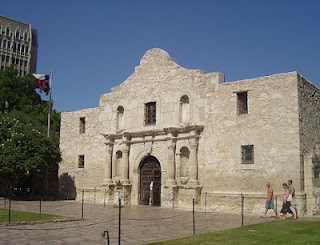 If you've had some wine, squint a bit and remove the detail, you might just see some similarity between the lines of the Cathedral, and the Alamo (scroll up). Go figure. 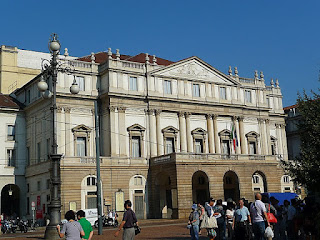 In 1778 ~ Just two years after our country's birth, this opera house known around the globe was inaugurated.

Understated from the outside, yet magically textured on the inside, you'll find Teatro alla Scala a site worth stopping for... and it's mere steps from the Cathedral.

La Scala is only closed one week out of the year so why not catch a performance here while you're in town? Art, artifacts and more will delight the senses.

Our time here was cut too short, but not so short to prevent me from taking this pic of amazing chandeliers which traveled from Bohemia to Italy, resting in the foyer outside the theater proper. Take a virtual tour and learn more about the Teatro here! 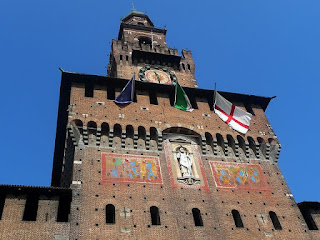 Castello Sforesco was but a brief stop on our whirlwind tour of Milan, but this Milan staple, complete with moat, dates back to the 1300s and features libraries, museums and well-sculpted grounds. More online here.

A spiritual Italian kissin' cousin of the Alamo, make a part of a day's stay here and drink-in the history. 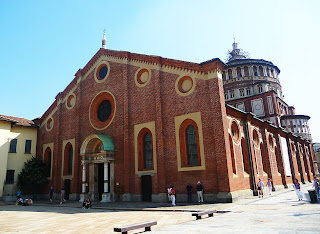 This famed mural will probably surprise you at 15 x 29 feet. Texas-sized, the mural lives in the dining room (refectory) of the church Santa Maria delle Grazie, one of the most beautiful and charming I've laid eyes upon. The church sits in a peaceful neighborhood "nook" of Milan and from the outside, you'd have no idea the significance of what's inside.
While frescos are prominent throughout Italy, fresco (fresh) painting is done with wet plaster which can't be modified, so Leonardo painted on a dry wall, finishing it up in 1498 after 3 years of off-and-on work. Sadly, his creation began peeling soon thereafter and the mural has undergone several restoration efforts, the most recent was a 21-year restoration which wrapped-up in 1999.

Already in awe, I formed a double-lump in my throat 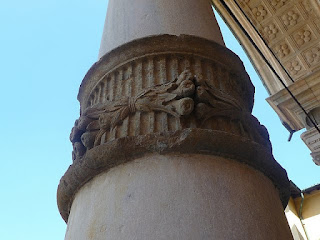 when our guide "Manuela" told us that this church was bombed by American planes during WWII but surprisingly the wall with the mural survived thanks to support of a few sandbags.

While groups are only allowed in the main hall for a 15 minute viewing, I think you'll agree this is a time well spent when in Milan. Make sure and admire the graceful lines inside and outside of Santa Maria delle Grazie while here. I loved the detail of the church's column (above). 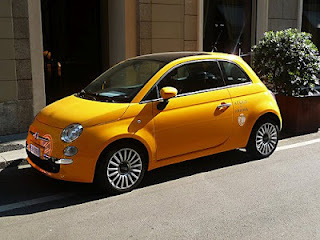 Then pinch yourself ... you're standing in the heart of an outdoor shopper's paradise!

I work for a shopper marketing agency, so imagine the total thrill that I was walking the famed street. Brands were dripping everywhere ~ Cartier, Dior, Farragamo, Gucci, Prada, Valentino, YSL... the list goes on. So, too, will the pitter patter of your super-shopper's heart beat. 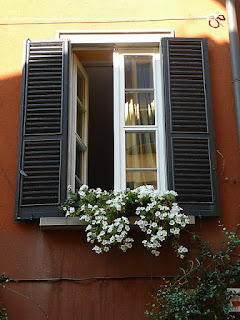 Known as one of the most trendy and evocative neighborhoods in Milan, The Brera District was once populated mainly by artists and bohemians. The district oozes charm and is a fantastic way to lose yourself for a day wandering its inspiring alleyways, eateries and fanciful shops unique for fashion and antiques.

In Brera, you'll find the Pinacoteca di Brera and the Accademia di Brera, both a must-see-do. Inside the Palazzio di Brera, you'll find the academy dedicated to the creative arts and the 15th-18th century fine art museum founded in 1809 by Napoleon I. The museum is Milan's oldest and one of Italy's largest. You can roam the Academy grounds for free, but entrance to the museum costs a sensibly small fee. 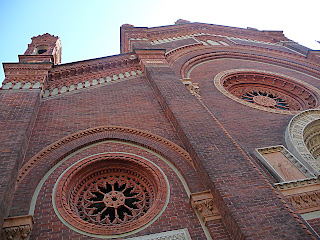 I was amazed with the textures here. In fact, materials for parts of this church were infused after the destruction of the Visconti family castle, which was replaced by Castello Sforesco (mentioned above). 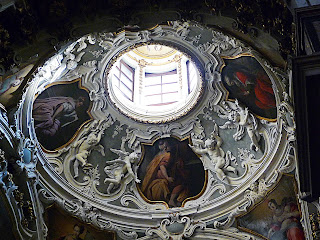 Stop inside and have a seat on the right side of the front of the church and look up. Jaw dropping. We sat for a stay here and enjoyed the morning light, the art and the magical inspiration, which didn't require any Italian-to-English translation.

You can learn more about this magnificent church online, including how you can score Italian classes twice a week for free.

You can find world-class dining in Milan. My stay here was just for a couple of days so we "winged-it," with the luck of what we found (sorry, tummy). Here are a couple of places you might consider: 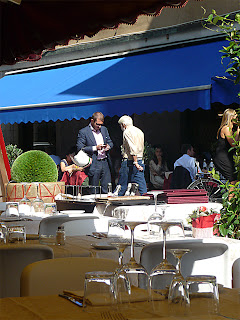 Il Cestino ~
When in the Brera District, we stopped for a tasty lunch here at Il Cestino. Sit on the patio and drink-in some vino and the Italian sun from your well-poised people-watching perch.

The delicious creme-filled licorice treats (below) were the perfect ending to a delightful lunch on the covered patio at Il Cestino. The treats? They were gone in a snap and a smack!

We ate here because it was mere steps from our rental. Food Art's hip and trendy lines attracted us. Known as a contemporary sushi hot spot we ordered the beef and patate per due. While Food Art receives two thumbs down for raising the menu price of the beef after our order went to the kitchen, multi-glasses of wine soothed my anger. The "Tummy Gods" were pleased, otherwise. 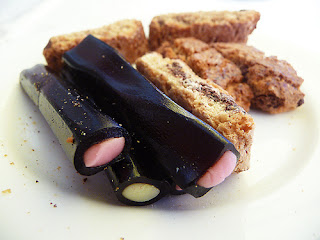 Get in line! Enjoy a glass of wine, some Bocelli and see some stunning photos of Milan at my Flickr photo stream.

We taxi cabbed it to Milan's Centrale railway station bound for 3 days in Venice. While this floating city was amazing to see, it's not at the top of our Italy repeat list. Learn why.